Taylor is a comedian, ventriloquist, musician, and all around incredible talent who started his career as musical director of Chicago's Second City. With over 100,000+ comedians working today, it is difficult to get your name noticed and land a gig.   Taylor’s humor is “clean,” so he doesn’t swear and avoids inappropriate topics; as such, he has a unique ability to make audiences of all ages feel engaged and comfortable.

While his humor is clean,  he is definitely NOT a children’s act. When he was booked into a children’s venue, the little ones didn’t understand the content - and when he booked into traditional comedy clubs, patrons weren’t satisfied with his clean language.

Resulting from the mixed messaging, the wrong sorts of booking engagements lead to poor reviews, which were really more about the fact that the “brand proposition” was not articulated well.  He had a small, loyal following but he was having a hard time attracting and leveraging “natural fans” who could become ‘brand advocates.”

During our Reality Check we examined Taylor’s brand, his existing fan base, the reviews (both good and not so good) and his overall marketing.

We immersed ourselves in Taylor’s world.  He is a stand-up comedian, ventriloquist, musician, and actor, incorporating all of his talents into his act in a wonderfully vibrant and hilarious performance.  We watched his clips, saw his performances, and conducted a series of interviews and exercises with Taylor and his management team in order to determine key business factors, discover the brand, and develop a strategy for the brand.  We also held interviews and focus groups with select audience members, venue owners, and other industry influencers and did tons of research to immerse ourselves in the business of stand-up comedy.

With such a specific and distinct audience, Taylor needed to successfully convey and articulate his “brand proposition” and comedy style to booking agents and potential venues, something he had never done before.  Taylor is hilarious, but to the right people. We put all of the disparate information into our brand blender, and created the brand positioning and brand essence “Good Clean Fun.”

While seemingly straightforward, this was an “Ah-Hah!” moment for the Taylor Mason team.  They realized that by not doing this critical self evaluation, Taylor was focusing on the wrong audience.  By changing his target to family minded audiences, corporate clients, and religious groups, audiences were able to understand Taylor’s comedy and appreciate his “good, clean fun” that entertains, makes you laugh, and presents a perspective about life.  The team was able to embrace their market and promote specifically to their true audience.

The new brand essence needed to be conveyed on Taylor’s website and in the materials that he was sending out to booking agents and venues.  First we got to work creating a new logo and standardizing the TM brand – which had become disparate and confused over the years.  We developed a brand book which spelled out clearly how the brand should be represented.  This standardization helped to avoid the common occurrence of botched brand reproduction by venues who would copy and paste just about any logo or graphic that they found off the web into their ads and on their websites.

We knew that in order to really address the challenges set forth we needed to understand Taylor’s overall business goals. His primary goal as an entertainer was to become a household name, so we custom designed a strategic planning program identifying concrete business activities to help him realize that goal.

In these strategic planning sessions, a huge cost and time issue arose.  Taylor visited more than 200 cities in a given year, and some more than once during the year.  This led to a crazy travel schedule and massive travel expenses.  Our solution was the “Mayhem Tour.”    By creating a theme for the tour, and promoting it appropriately, the TM team was able to take control of the calendar in a way that they never had before.  Now, the tour schedule became the lens against which all incoming inquiries were accepted, and venues were targeted in specific cities to fill dates and maximize travel cost and time.   The Mayhem Tour was supported by a compelling story in which Taylor was kidnapped by his own puppets. This allowed us to develop some interesting creative, and really draw the fans in and engage them in contests and narrative.

We also created a series of packages for Taylor and his team to send to the media, venues, and booking agents.  The booking kits included Mayhem Tour posters, postcards, eblasts, and other creative for the Venues to use at their discretion.  This made the TM brand more inviting to booking agents.

We created a marketing calendar strategically identifying what activities, marketing and outreach to pursue.  We included “development” in the calendar so that we were sure to set aside some of his marketing budget for the newest trends in social and mobile, integrating apps, and mobile engagement campaigns into the mix.

Over our long relationship with Taylor, we worked on many projects - from holiday promotions and creative support for his Disney Cruise Ship performances, to promoting his book and developing an online Fan Club.  We also changed the way he approached his media choices.  There were situations where Traditional PR was part of the mix, yielding  appearances on the 700 Club, among others.  But we began to focus far more on social and online options.  At one point, we made the decision to abandon tradition PR to focus the budget on a targeted mobile promotion.  Taylor visits nearly 100 markets in a year – TM entertainment can not afford to promote in every market.  Instead, we decided to make a series of surgical strikes.  We incorporated a mobile contest into Taylor’s show, asking the audience to text to win a puppet.  While only one person won the puppet from the show, we were able to obtain the contact info for most of the audience, allowing us to notify them when Taylor returned to that city and promote to them during the year.

Giveaways proved to be a strong marketing strategy with Taylor’s campaign.  We created personalized Christmas gifts for his fans, including posters in which we actually photoshopped fan pictures into Taylor’s group pics.

We’re currently in development of a new Tour concept, which will require a redesigned website and all new promotional creative, all focused on the brand essence “Good Clean Fun” and his business goals. 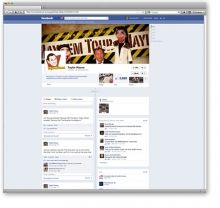 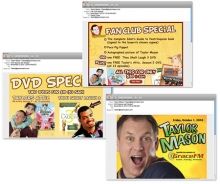 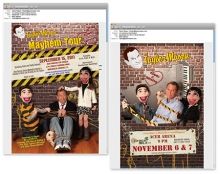 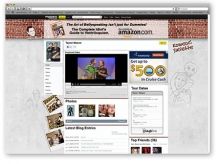